One of the factors you may want to consider when picking between the Xbox Series X and Xbox Series S is the energy consumption of each hardware. You can check out this comparison guide to see how much these two Microsoft gaming consoles will consume.

If you are planning to use your console as mainly a streaming box and/or connect it to a 1080p TV, then the Series S is the better choice in terms of power consumption.

With that said, the extra energy being used by the Xbox Series X should result in better looking games that run at higher resolutions and frame rates. So, if you are looking for the best graphics, then you should pick up the Series X instead.

You can take a look at our comparison table for the power consumption between the Xbox Series X and Xbox Series S.

The energy saving mode is when you fully shut down your Xbox Series console without unplugging its power cord from the power outlet.

According to internal testing done by Microsoft using methods from the Game Console Voluntary Agreement, the Xbox Series X consumes 0.5 W, which is 0.1 W (or 25%) more than the Xbox Series S.

If you decided to put your console into Sleep Mode, then the lower power state will consume 13 W on the Series X, which is 0.3 W (or 30%) more than the Series S. 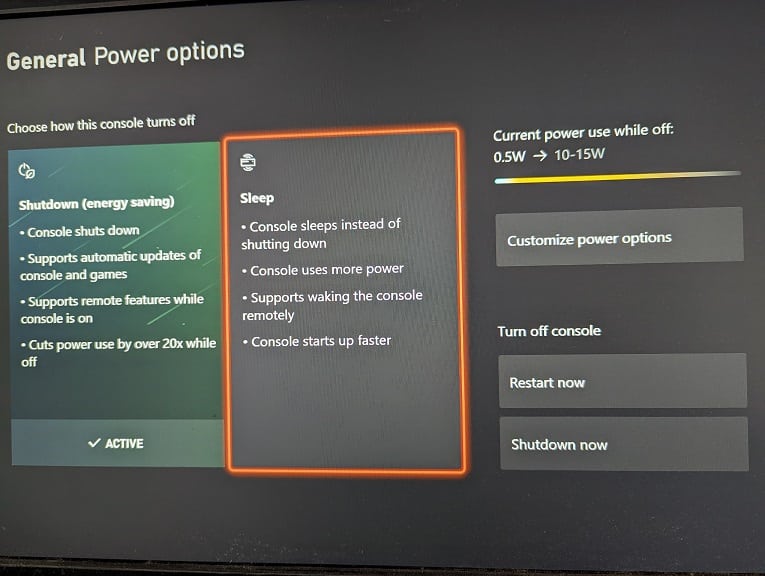 When it comes to DVD playback, the X version of the gaming hardware takes up 48 W of energy consumption. Since the S version does not come with a disc drive, then it is not able to play DVDs.

Of course, the X version of the hardware uses the extra power to provide high resolution, better frame rates and other visual enhancements when compared to the S version.

To see how you can directly compare the aforementioned energy saving and sleep modes on your Xbox Series system, you can check out this tutorial.