Variable Refresh Rate is a helpful feature for the LG B2, C2 and G2 as it will make most video games that have frame rate issues look smoother in addition to getting rid of screen tearing. Currently, the PlayStation 5, PlayStation 5 Digital Edition, Xbox Series S and Xbox Series X consoles use VRR.

To see how you can turn on Variable Refresh Rate for the B2, C2 and G2, you can take a look at this tutorial at Seeking Tech.

Before we begin, it should be noted that this guide is based on the following television sets:

This article should cover the following model numbers:

1. If you haven’t done so already, you should update the firmware of your B2, C2 or G2 television set.

This is especially important for the PS5 consoles as support for Variable Refresh Rate was only added through a firmware update.

3. Make sure you are using the HDMI cable that came with your system to connect to your television set.

You can also use other HDMI cables as long as it is HDMI 2.1 for the PS5 consoles and at least HDMI 2.0 for the Xbox Series consoles (although HDMI 2.1 is highly recommended for the Series X if you want to get the most out of its graphical features).

4. Once you are ready, turn on your television set and game console.

5. Make sure your TV is displaying the HDMI input source of your PS5, PS5 Digital Edition, Xbox Series X or Xbox Series S.

6. Press the gear icon to open the Game Dashboard.

You may also need to go to Picture > Select Mode in order to change the picture mode to Game Optimizer in order to use the Game Dashboard.

7. From the Game Dashboard, you should see whether or not VRR has been turned on.

8. If the dashboard shows that Variable Refresh Rate is currently turned off, then we recommend checking to see if you enabled VRR support on your game console.

For the PlayStation 5 and PlayStation 5 Digital Edition, go to the home screen menu and then select the gear icon on the top right side to head into settings. From there, you need to select Screen and Video > Video Output > VRR. Finally, set VRR to Automatic. You may also want to enable the Apply to Unsupported Games setting in order to force Variable Refresh Rate on games that don’t natively support it. 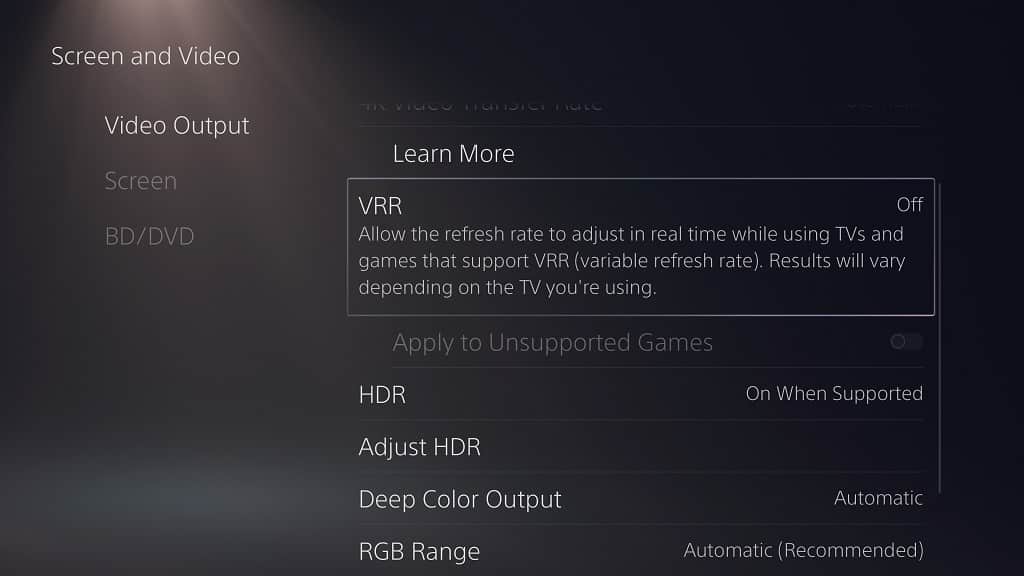 For the Xbox Series X and Xbox Series S, you need to go to Settings, which you can do by pressing the Xbox button to bring up the guide menu. From the guide menu, go to the “Profile & system” tab and then select Settings. In Settings, go to General > TV & display options > Video modes. Finally, make sure that the “Allow variable refresh rate” setting is enabled.